K9 Units in Small Departments:
Overcoming Budget Constraints for Forming and Maintaining the Unit.
A Thesis presented to the Faculty of Mount Olive College in partial
fulfillment of the requirements for the degree of Bachelor of Science in
Criminal Justice Administration
by
David Eric Anderson
Approved by: _______________________________ Date: _____________
Project Thesis Advisor: Prof. Mike Bumgarner
Cohort #17 Wilmington, North Carolina
ii
K9 Units in Small Departments:
Overcoming Budget Constraints for Forming and Maintaining the Unit.
By
David Eric Anderson
David Eric Anderson is presently employed by the Wilmington International Airport
Public Safety Office, Wilmington, North Carolina, as a Police Officer. Attaining the rank
of Lieutenant in 2005, David supervises the "C" shift which operates from midnight to
8:00 am. The Public Safety Office provides law enforcement support, aircraft fire
fighting and rescue response, and medical assistance to the airport and surrounding area.
David has worked with the Public Safety Office as a Public Safety Officer, Field Training
Officer, K9 Officer, and a supervisor since 2002. David holds an Intermediate Law
Enforcement Certification, North Carolina Law Enforcement Instructor Certification, and
has completed training as a Field Training Officer, K9 Officer, and the North Carolina
Justice Academy Police Law Institute. He is currently completing his degree in Criminal
Justice Administration at Mount Olive College. David lives with his wife, Beverly in
Wilmington, North Carolina. After graduation, David hopes to seek a Master's Degree to
help further his criminal justice career. David would like to teach criminal justice
courses at a local college.
iii
Abstract 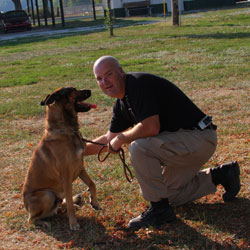 IMPLEMENTING A CANINE UNIT IN A SMALL POLICE AGENCY
E.M.U. SCHOOL OF POLICE STAFF AND COMMAND

An applied research project submitted to the Department of Interdisciplinary Technology as part of the School of Police Staff and Command Program
September 19, 2003

ABSTRACT
For several years, the City of Fraser Public Safety Department has been using canine resources from other communities in order to curtail crime. This research paper focused on the importance of implementing a canine unit within a police agency and selecting the most qualified individual for the handler position.
With the increase in drug trafficking, it is imperative that even a small police agency such as the City of Fraser creates a canine unit. The use of the canine can be advantageous in search warrant executions, tracking fleeing suspects, building and vehicle searches, and public relations.
The purpose of this research project was to seek information in order to determine if a canine unit would be beneficial to the police agency. The information that was gathered not only will assist the City of Fraser but all police agencies in establishing their own canine unit. Several topics were investigated during this project:
a) The implementation and ongoing costs associated with the unit
b) The advantages and disadvantages the canine unit offers
c) The type of individual that should be chosen for the canine position
d) The administrative issues relevant to the unit
The writer selected numerous experienced canine administrators as well as handlers to assist with this research project. Each individual was interviewed and provided with a written survey of questions that were relevant to the issues. Various books and articles were also utilized in the research.
The results of this study indicated that a canine unit would be advantageous to the city if properly managed. The most important issue was choosing the right handler in order to make the

unit a success. If the handler is not self-motivated or lacks work ethic, the program will be unsuccessful.
The writer will recommend, based on the research, that the implementation of the canine unit will not only promote or benefit the department but the entire community.

The City of Fraser Police Department has relied on the support of canine officers from other agencies for many years. Recently, three surrounding police agencies have eliminated their canine units due to budget constraints.
In 1996, the city created a Special Investigation Unit in order to investigate narcotic trafficking complaints. A great deal of the unit’s success was attributed to the assistance of the canine from other police agencies. However, the elimination of the canine units from the other agencies will unquestionably disrupt the unit as well as the department. Up to this point, there has been no research conducted on implementing and operating a canine unit within the City of Fraser. In order for the Special Investigation Unit to maintain its standards, it is imperative that the city creates its own unit in order to make the canine readily available.
There have been numerous occasions where a canine was immediately required to assist officers with a narcotic’s search warrant and road patrol officers with vehicle searches. The most recent case occurred when officers from the Special Investigation Unit received information from a reliable informant that two individuals were going to deliver a large amount of a drug called ecstasy to a residence in Fraser. The officers received additional information that the lone female passenger was in possession of the illegal substance. The officers subsequently stopped the vehicle, interviewed the male and female occupants, and obtained a consent search. After an exhaustive search, the officers could not locate any drugs. A canine was then requested to assist the officers at the scene. The nearest department that could supply a canine was 40 minutes away. When the handler arrived at the scene, his canine alerted to the exterior of the vehicle and the front passenger seat where the female was sitting. The female was

then detained and transported to the police department where a female officer searched her. The search resulted in the seizure of 300 ecstasy pills. The prosecutor’s office declined to authorize a warrant based on the time that lapsed from the traffic stop to the arrival of the canine officer. This could have been avoided if the city had its own canine handler.
The purpose of this research project was to gather information relevant to establishing a canine unit within a police agency. It was important to gather a variety of data that is germane to the costs of the unit, the selection of the handler, the advantages and disadvantages of creating a unit, and administrative issues associated with the program. This data was collected by means of interviewing several experienced dog handlers and administrators from various police agencies. The writer also prepared a written survey that was forwarded to the handlers that contained questions that were significant to the canine unit. There were also several reference articles, documents, and books used to obtain all of the necessary information.
BACKGROUND AND SIGNIFICANCE
The use of canines in police work date back to the 14th Century in St. Malo France where canines were used to guard dock installations (Northern Constabulary Police Dog Section, 2003). They were also used in Paris in 1895 to combat the street gangs. In 1896, Ghent, Belgium was the first city in the world to formulate a school where dogs could be trained for law enforcement purposes (RCMP Police Dog Service, 2003).
New York City established canine programs in 1907. Since then, over 1,000 American forces have had units for short and extended periods of time.
Canines were used during World War I and II where dogs acted as messengers, tracking, locating the wounded, and for spotting machine gun nests.

The use of the canines in the early 1960s was instrumental in breaking up demonstrations during the civil rights era.
Today, there are approximately 7,000 police canine teams in the United States (Butler, 2002).
The historical data indicates that canine have been instrumental for thousands of years. There are an endless amount of services that they are capable of performing.
There is no reason why a canine unit cannot be implemented in every police agency provided that they have the funds, manpower, and legitimate reasons for its existence.
The City of Fraser has depended too long on neighboring police agencies for their assistance. Is it fair to continuously call the same police departments requesting their assistance and diminish their manpower? There are times where a handler can be engaged assisting other agencies for hours.
The City is currently at the point where it cannot obtain assistance from surrounding communities due to budget cuts and the elimination of their canine programs. This is why it is vital to create a program within the department. The research indicated that the advantages far outweigh the disadvantages of establishing a program.
If the canine program is established in the future, the dog will be readily available for service. The department will not have to consume valuable time in attempting to contact three or four agencies for the support of their dog, while a fleeing felon is running down the city streets. The officer will not have to worry about backup or being injured because the canine will assist him/her. The dog will be instrumental in searching a vehicle or a home for narcotics. The program will bring the community closer to the police department where it will illustrate the importance of law enforcement and how technology is so ever changing.

LITERATURE REVIEW
A large portion of this research project relied on interviews and survey questions. The questions on the survey focused on the following issues: