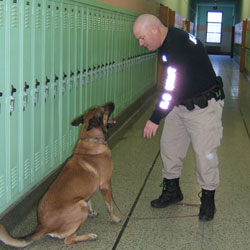 Drugs are a life-threatening problem in our schools.

Drug use results in an increase in crime and a lowering of overall student performance. Research by the National Institute on Drug Abuse (NIDA), from 1991 to 1996, shows the percentage of 8th graders having used illegal drugs has approximately doubled. During the same 5 year period, there was an approximate 50% increase in use for 10th and 12th graders.

In addition, as reported in too many recent news stories of student deaths in schools, firearms are an ever-increasing threat. Drugs and firearms are usually linked, with drugs preceding violence.

Illegal drugs and firearms present a problem for teachers, administration, and most importantly, for students. Undoubtedly your school has tried any number of different solutions, but is still seeking a solution that has a strong initial impact, and an ongoing impact, on students and personnel.

Our service is available to assist you in establishing and maintaining a drug free and firearm free learning environment.

As a private company, you may call us in for any type of controlled substance search, even routine checks. Unlike law enforcement agencies, we are not restricted to come with probable cause and a search warrant. We can come anytime.

Demonstrations of the trained dogs to the school population can convey your strong message of support to those that wish to be in a safe and drug free learning environment.

The "Drug Free Schools and Communities Act of 1986" passed by Congress finds that schools and local organizations in communities throughout the Nation have special responsibilities to work together to combat the scourge of drug use.. Prompt action by our Nation's schools, families and communities can bring significantly closer the goal of a drug-free generation and a drug-free society. Federal and state funding is available to help implement this law.

Public school officials have a duty to protect their students and maintain a safe environment conducive to education. The Fifth Circuit of the United States Court of Appeals has recognized that to fulfill these duties, school officials must have broad supervisory and disciplinary powers. The issue is that "as a matter of constitutional law", can a school district, acting in good faith in an effort to deal with a serious drug and alcohol problem, subject students, their lockers, and their automobiles to the exploratory sniffing of dogs trained to detect certain contraband? In Horton v. Goose Creek Independent School District the fourth amendment right to be free from unreasonable searches and seizures was a constitutional concern. The court distinguishes between the use of canine detection with regard to lockers and automobiles on the one hand and the students' person on the other.

With regard to lockers and automobiles, the Court held that a dogs' sniffing of students' lockers in public school hallways and automobiles parked in public school parking lots does not constitute a search within the meaning of the fourth amendment, and therefore, is not unconstitutional. The court analogizes the sniffing of lockers to the sniffing of luggage checked in at the an airport or bus terminal reasoning that there is no reasonable expectation of privacy in the airspace surrounding the luggage.

In reference to the fourteenth amendment protection against the deprivation of liberty without due process of law, the Court held that the minimal harassment accompanying the mere presence of the dogs on school grounds did not rise to the level of due process violation. This conclusion was reached regardless of the fact that these dogs were of the breeds often used as police service dogs because the ones employed in this situation were selected due to their non-aggressive and docile nature.

Under the Court's ruling, the use of canines to detect the presence of drugs or alcohol by sniffing students' cars or lockers is not a search and therefore there is no fourth amendment concern. The Court additionally found that the fourteenth amendment was not a viable concern. Thus the use of our k9 search utilizing highly trained detection dogs should not raise any constitutional concerns.

K9 Solutions Center is the only company of its kind to bring to the public live and informative demonstrations. We offer a hands-on demonstration for your school students, faculty, civic group, or community group.

These interactive presentations are an invaluable supplement to an ongoing drug awareness and the possessing of illegal weapons program. The educational and high-energy presentations incite both the students and faculty to pose in-depth questions to the handler.

"Search and Detect" demonstrations also can provide an exciting and stimulating avenue to promote drug awareness and the illegal possession of weapons in your school, scout troop or other organizations.